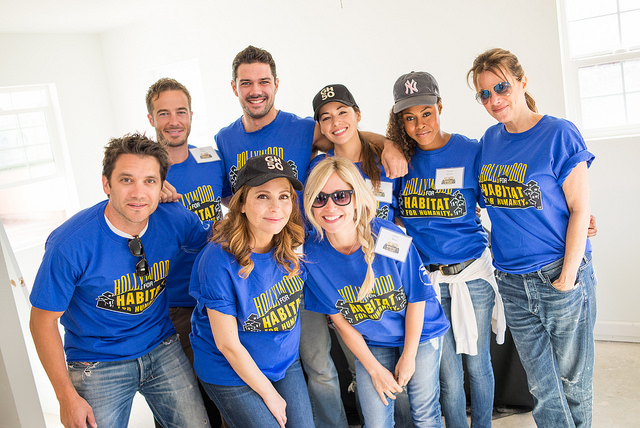 Registration is Now Open to Build Homes Alongside GH Cast Members on April 22, 2017

Los Angeles, CA – April 17, 2017:  Fans of the long-running, ABC daytime drama, General Hospital will once again have the opportunity to spend a day building a Habitat for Humanity of Greater Los Angeles (Habitat LA) home alongside their favorite cast members.  The 7th Annual General Hospital Fan Build will take place on Saturday, April 22, 2017 at an undisclosed location in Los Angeles. All proceeds will help Habitat LA build more affordable homes in greater Los Angeles.  Fans may register online for one of 25 build spots available.

A $300 REGISTRATION FEE IS FULLY TAX DEDUCTIBLE AND INCLUDES:

General Hospital Fan Build Days originated in 2009 with Brandon Barash and Lisa LoCicero, who created the event as a way to reward loyal fans of the show, while becoming more involved with Habitat for Humanity.  Cast members and fans enjoy a day of building a home and raising awareness for affordable housing.

“To be able to support Habitat LA in this way is such a gift,” said Lisa LoCicero.  “There is such a need for decent, affordable housing, especially in Los Angeles, and I am honored to be able to help in some small way. I may be sore for days after, but I have a great time doing it!  I can’t thank our fans enough for supporting this event for so many years!”

Dom Zamprogna added, “It’s so special to build with Habitat LA alongside the families who are working so hard to become homeowners. I feel blessed to be a part of this and I am so grateful to share this experience with our amazing fans, who give so generously to support this build event and Habitat’s mission.”

This build site is part of Habitat LA’s Building a Greater Los Angeles campaign with a goal to invest $100 million by 2020 into revitalizing neighborhoods and increasing access to affordable homeownership opportunities. This investment will also help strengthen the local economy, creating healthier and more affordable homes for low-income families and individuals.

Habitat for Humanity of Greater Los Angeles (Habitat LA) brings people together to build homes, communities and hope. As the top nonprofit homebuilder in the greater Los Angeles area with five consecutive Charity Navigator 4-Star ratings, Habitat LA has partnered with volunteers, donors and Habitat homeowners to build, renovate and repair more than 1,200 homes locally and worldwide since 1990. The lives of thousands of individuals have been transformed as a result of having a decent and affordable place to call home. Habitat homeowners help build their own homes and pay an affordable mortgage. By supporting Habitat LA through volunteerism, donations and supporting affordable housing, everyone can help families achieve the stability and self-reliance they need to build a better future. To learn more, visit www.habitatla.org.