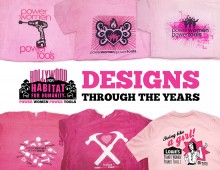 The winning designer will be announced in a press release including his/her name; receive an invitation to attend “Power Women, Power Tools” on June 15, 2013 (transportation will not be provided) plus special recognition online, on-site at the event and in printed materials for the event. Additionally, there will be a special announcement during the event honoring the winning designer.

For the past eight years, the “Power Women, Power Tools” t-shirt has become a collectible item, which some consider bragging rights for having participated in the special build day.  Until now, HFH GLA has designed the t-shirt in-house, however the organization has opened up the opportunity to the public as a way of engaging a new audience in a creative and organic way.  The contest is a fun way to support a local designer, while promoting the mission of Habitat for Humanity in Greater Los Angeles.

Habitat for Humanity of Greater Los Angeles (HFH GLA) strives to eliminate substandard housing through advocacy, education and partnership with families and individuals in need to build decent, sustainable and affordable housing. Since 1990, HFH GLA has built and renovated nearly 800 homes locally and worldwide, transforming the lives of hundreds of individuals. HFH GLA is a GuideStar® Valued Partner and has achieved the coveted Charity Navigator 4-Star rating awarded to non-profits for sound fiscal management and commitment to accountability and transparency. For more information, please visit http://www.habitatla.org or call 310-323-4663. Visit our blog at http://buildingagreaterla.blogspot.com.