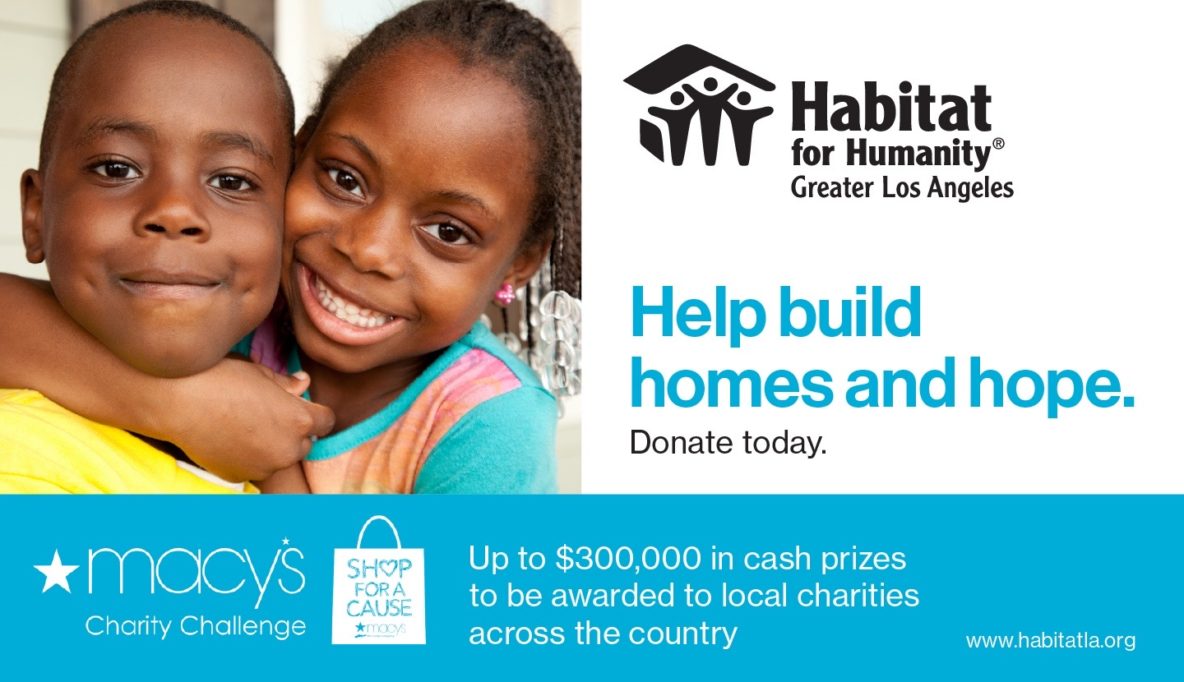 Help Habitat LA win $100,000 by donating to its CrowdRise campaign

Los Angeles, CA – July 14, 2017: Habitat for Humanity of Greater Los Angeles (Habitat LA) has joined the Macy’s Shop For A Cause Charity Challenge, a fundraising competition on CrowdRise, the largest crowdfunding platform for good. Participating charities across the country will compete for up to $300,000 in prize money. Habitat LA has joined the Challenge on CrowdRise in hopes of raising money to build more affordable homeownership opportunities.

Habitat LA is committed to the vision of a world where everyone has a decent place to live by bringing together communities, organizations, companies and volunteers to achieve the goal of eliminating substandard housing. The organization believes in a hand up, not a hand out with a commitment to building self-reliance through homeownership, thereby empowering low-income families and individuals with the foundation to build a better future. Donations to the Macy’s Charity Challenge will help Habitat LA in achieving their goals of Building a Greater Los Angeles.

“We are grateful to Macy’s for their commitment to organizations like Habitat LA and for helping to raise millions of dollars for great causes,” said Erin Rank, President and CEO, Habitat LA. “This platform will increase our mission’s visibility and the funding will significantly help us to build more affordable homes with the families and individuals we serve.”

CrowdRise Challenges are innovative fundraising competitions for charitable organizations designed to build capacity, create massive engagement and leverage, and use the power of the crowd to provide new meaningful funding streams for organizations in every sector.

Since 2006, Macy’s Shop For A Cause has partnered with accredited schools and nonprofits nationwide to raise tens of millions of dollars for their ongoing charitable efforts.

To help Habitat LA win the Macy’s Shop For A Cause Charity Challenge head to https://www.crowdrise.com/habitat-for-humanity-of-greater-los-angeles1.

ABOUT HABITAT FOR HUMANITY OF GREATER LOS ANGELES
Habitat for Humanity of Greater Los Angeles (Habitat LA) brings people together to build homes, communities and hope. As the top nonprofit homebuilder in the greater Los Angeles area with five consecutive Charity Navigator 4-Star ratings, Habitat LA has partnered with volunteers, donors and Habitat homeowners to build, renovate and repair more than 1,300 homes locally and worldwide since 1990. The lives of thousands of individuals have been transformed as a result of having a decent and affordable place to call home. Habitat homeowners help build their own homes and pay an affordable mortgage. By supporting  Habitat LA through volunteerism, donations and supporting affordable housing, everyone can help families achieve the stability and self-reliance they need to build a better future. To learn more, visit www.habitatla.org.

ABOUT CROWDRISE
CrowdRise is the world’s largest crowdfunding platform dedicated exclusively to charitable fundraising.  Used by millions of individuals, tens of thousands of charities, hundreds of companies and many of the most famous artists and athletes in the world, CrowdRise enables people to creatively leverage their resources and networks to unlock the power of the crowd to support positive social missions and create massive impact.

Founded by actor Edward Norton, film producer Shauna Robertson and Robert and Jeffrey Wolfe, CrowdRise has conceived, implemented and powered campaigns that have raised hundreds of millions of dollars to date. For more information visit www.CrowdRise.com. In January 2017, CrowdRise merged with GoFundMe to offer both people and organizations the best fundraising tools for any cause they care passionately about.