Lowe’s, Union Bank, & Sony Pictures Were the Top Sponsors of the Milestone Event 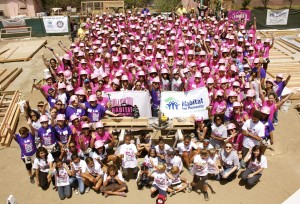 The four homes are part of a seven-home neighborhood currently in progress in Lynwood. The site will feature six homes that are two stories with three bedrooms and 2.5 baths and a three-bedroom, 1.5 bath single story home, which was designed by Michael Graves, a long-standing advocate for the disabled, to be handicap accessible. PWPT attendees were fortunate to hear from single mom and veteran, Roxana Gomez, who is purchasing and will live in one of these homes, at the start of the build day. Roxanna shared with the volunteers her struggles as a single mother and her journey to homeownership with Habitat for Humanity.

View photos from this event here.

“It was an honor to celebrate the tenth anniversary of this event in the company of so many amazing Power Women,” said Erin Rank, President and CEO of Habitat LA. “When this event began ten years ago, we knew it would be special but we never dreamed that it would have the tremendous impact that it’s had on the housing landscape in Los Angeles. PWPT volunteers over the past ten years have built a lot of homes and I can’t wait to see what the future of this event will bring!”

Since 2005, 2,500 PWPT volunteers have helped build 68 homes locally and also have framed walls for two homes that were shipped to the hurricane-ravaged Gulf region. “Power Women Power Tools” is a landmark event for Habitat LA and Hollywood for Habitat for Humanity (HFHFH), the organization’s entertainment industry program, increasing in popularity every year. The 10th Annual “Power Women Power Tools” was made possible through the generous support of primary sponsors Lowe’s, Union Bank, and Sony Pictures Studios.

“We are excited to have partnered with Habitat for Humanity of Greater Los Angeles to build four new homes in the Lynwood community as part of Power Women Power Tools,” said Maureen Ausura, chairwoman of the Lowe’s Charitable and Educational Foundation. “Lowe’s is committed to recruiting, educating and inspiring women to build decent and affordable homes in partnership with low-income families in their communities.”

During a lunchtime presentation, volunteers heard from Erin Rank and Maureen Ausura, as well as Lynwood Council Member Maria Teresa Santillan-Beas, a representative of Habitat’s Youth United program, and the Co-Founders of Hollywood for Habitat for Humanity Randall Wallace and Tom Shadyac, who moved the crowd to tears. It was Toshia Williams, however who energized the crowd by sharing her story of becoming the first Habitat Partner Homeowner in Greater Los Angeles to fully pay off her mortgage. Toshia’s determined spirit gave the volunteers all the encouragement they needed to get back to work and complete the task at hand.

This year’s event attracted a large crowd with some high profile volunteers including these recognizable Power Women (and men):

The seven new homes being built will be sold to qualified homebuyers who are investing sweat equity hours building their future Habitat home and the homes of other Habitat homebuyers and have agreed to pay back a zero percent mortgage loan. More information about homeownership opportunities is available online or by contacting Habitat’s Homeowner Relations Department at 310-323-4663.

About Habitat for Humanity of Greater Los Angeles:
Habitat for Humanity of Greater Los Angeles (Habitat LA) strives to eliminate substandard housing through advocacy, education and partnership with families and individuals in need to build decent, sustainable and affordable housing. Since 1990, Habitat LA has built and renovated more than 900 homes locally and worldwide, transforming the lives of hundreds of individuals. Habitat LA is a GuideStar® Valued Partner and has achieved the coveted Charity Navigator 4-Star rating awarded to non-profits for sound fiscal management and commitment to accountability and transparency. For more information, please visit http://www.habitatla.org or call 310-323-4663.

About Lowe’s in the Community
Lowe’s, a FORTUNE® 100 home improvement company, has a 50-year legacy of supporting the communities it serves through programs that focus on K-12 public education and community improvement projects. Since 2007, Lowe’s and the Lowe’s Charitable and Educational Foundation together have contributed nearly $200 million to these efforts, and for more than two decades Lowe’s Heroes employee volunteers have donated their time to make our communities better places to live. To learn more, visit Lowes.com/SocialResponsibility and LowesInTheCommunity.tumblr.com.