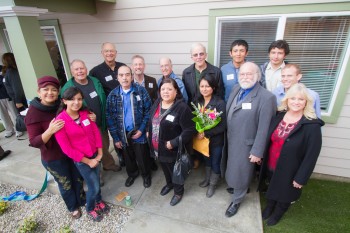 Los Angeles, CA – February 28, 2014: Habitat for Humanity of Greater Los Angeles (Habitat LA) has been awarded $137,500 from Thrivent Financial to build a home in Long Beach, California. This will be the ninth home built in in partnership with Thrivent in greater Los Angeles.  From the national partnership’s inception in 2005, Thrivent Financial and its members have now committed more than $200 million and more than four million volunteer hours.

The funding is part of an ongoing partnership between Thrivent Financial and Habitat for Humanity International, called Thrivent Builds with Habitat for Humanity. Through the partnership, Thrivent members, Habitat affiliates and others partner with families across the U.S. and around the world to provide affordable housing and stronger, generous communities.

“We are thrilled to be hosting this year’s Thrivent Builds project in our back yard again this year.  This will be our 9th build in the greater Los Angeles Area and we continue to look forward to the great working relationship we share with Habitat,” said Thrivent Wealth Advisor, Sarah Auernhammer.

“We’ve been partnering with local Lutheran churches for over 13 years and they have been a great partner to Habitat,” said Erin Rank, president and CEO, Habitat LA.  “Their work worldwide is a phenomenal accomplishment and we feel so blessed to have their support right here in greater Los Angeles. We see first-hand how their support is changing lives and building communities.”

For more information about Thrivent Builds programs or to volunteer, visit Thriventbuilds.com.

Habitat for Humanity of Greater Los Angeles (Habitat LA) strives to eliminate substandard housing through advocacy, education and partnership with families and individuals in need to build decent, sustainable and affordable housing. Since 1990, Habitat LA has built and renovated more than 900 homes locally and worldwide, transforming the lives of hundreds of individuals. Habitat LA is a GuideStar® Valued Partner and has achieved the coveted Charity Navigator 4-Star rating awarded to non-profits for sound fiscal management and commitment to accountability and transparency. For more information, please visit http://www.habitatla.org or call 310-323-4663. Visit our blog at http://buildingagreaterla.blogspot.com.

About Habitat for Humanity International

Habitat for Humanity International’s vision is a world where everyone has a decent place to live. Anchored by the conviction that housing provides a critical foundation for breaking the cycle of poverty, Habitat has helped more than 4 million people construct, rehabilitate or preserve homes since 1976. Habitat also advocates to improve access to decent and affordable shelter and supports a variety of funding models that enable families with limited resources to make needed improvements on their homes as their time and resources allow. As a nonprofit Christian housing organization, Habitat works in more than 70 countries and welcomes people of all races, religions and nationalities to partner in its mission. To learn more, donate or volunteer visit habitat.org.

About Thrivent Financial for Lutherans

Thrivent Financial for Lutherans is a faith-based, Fortune 500 financial services membership organization helping its nearly 2.5 million members to be wise with money and to live generous lives. Thrivent Financial and its affiliates offer a broad range of financial products and services. As a not-for-profit organization, Thrivent Financial joins with its members to create and support national outreach programs and activities that help congregations, schools, charitable organizations and individuals in need. For more information, visit Thrivent.com. Also, you can find us on Facebook and Twitter.