Savanah Wernick interned with Starfish PR during the summer of 2010 & 2011. I just love this post she wrote for us following her first tour in 2010.  She is a total team player and we will always cherish this little fish! 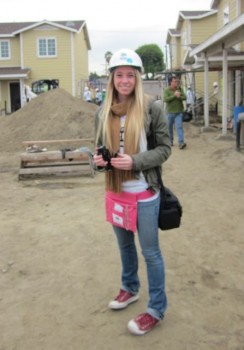 To be labeled an “intern” doesn’t indicate much responsibility. When you tell someone you’re an intern, the same question stings the conversation every time. “Oh, how nice,” they say, “is it paid?” You reply no, they nod, and immediately formulate assumptions that don’t give you much credit. She’s just there to watch. She’ll be the one getting the coffee, walking the dogs.

To be fair, these conclusions aren’t completely off the mark. In the setting of a large, multi-level business, it’s easy to imagine those who are not on payroll to get lost in the shuffle. While I’m sure that many internships in these businesses offer valuable exposure to a particular field of work, none can compare to the life of an intern at Starfish PR.

“Essentially, PR is telling the story” Angela said. In just one month I became absorbed in this storytelling. Starfish PR is a small company, consisting of just Angela Moore, Alison Mullin, and myself, the lone intern, but you would never know this by looking at their list of clients and the amount of effort involved. The size of this company actually turned out to be my greatest advantage. There was work that always needed to be done, and both Angela and Alison trusted me with substantial tasks everyday.

The difference between interning at Starfish and any other old office was the impact that the work of an intern could make. Public Relations is bridging the gap between a firm/company/brand and the rest of the world, so everything I did was sent out for EVERYONE to view. I can’t lie – this was a really intimidating thought once it took root in my mind. Every Facebook post, tweet, and picture I put up was a rush. Everyone will see this, I’d always tell myself, they’ll all criticize it, praise it, tell their friends, print it out and put it on their fridge.

While none of my tweets provoked any form of worldwide phenomenon as I had hoped (yet), I still felt the tremendous satisfaction that comes with executing a crucial step in the success of a business. I was helping, and I couldn’t help but feel that my help mattered.

The thrills, of course, did not stop at the computer keyboard. At only one week in, I found myself elbowing my way through a sea of photographers at a Habitat for Humanity build event, fighting amongst the sharp clicks of expensive DSLR cameras with my point-and-shoot to snap a few shots of the cast of Yo Gabba Gabba who were working on one of the homes. The same day I spun around to find Stephanie Pratt from “The Hills” carrying a ladder, and became so focused on capturing this moment for the Habitat Facebook or Flickr that I didn’t notice the stampede of photographers charging my way to get a similar shot until Alison saved my life and yanked me out of the way at the very last second. About a week later my acting skills were put to the test as I pretended to purchase a bed in the background of a KTLA Morning News shoot with Gayle Anderson at the Habitat for Humanity ReStore. Another day I went from taking photographs of UFC fighter Chuck Liddell and members of Music for Relief working on a Habitat house to a DIY Network TV show location with theDeconstruction and ReUse Network. Every day was an adventure, but that would be putting it lightly.

The experience I gained in one summer month is unlike any I have ever had before. I entered into a completely new world of business, and I can confidently say I see myself becoming an inhabitant there in my future. No, I didn’t earn a salary. I didn’t need one. Starfish gave me knowledge and skills that I didn’t know I could posses, and so far it has gone much farther than any paycheck I’ve ever received.